DU DSJ 2018 was held in online mode on June 19 at various exam centres across the country. Delhi School of Journalism conducted the DU DSJ 2018 entrance exam for the candidates who are seeking admission to five year integrated course in journalism. The students started reporting the examination centre before 7:00 am which was the prescribed reporting time by the authorities. The entrance exam, DU DSJ 2018 was held in one session- 8:00 am to 10:00 am. Candidates were only allowed to carry the admit card, valid photo id proof and a pen inside the examination hall. Careers360 visited the examination centre and captured the reaction of students after appearing for the DU DSJ 2018. Given below are the compiled student reactions on DU DSJ 2018 entrance exam for the future aspirants so that they know about the exam difficult level and questions asked. Also candidates can check the questions that were asked which were compiled by Careers360 as they spoke to some the students and based on their memory, they told us the about the questions. 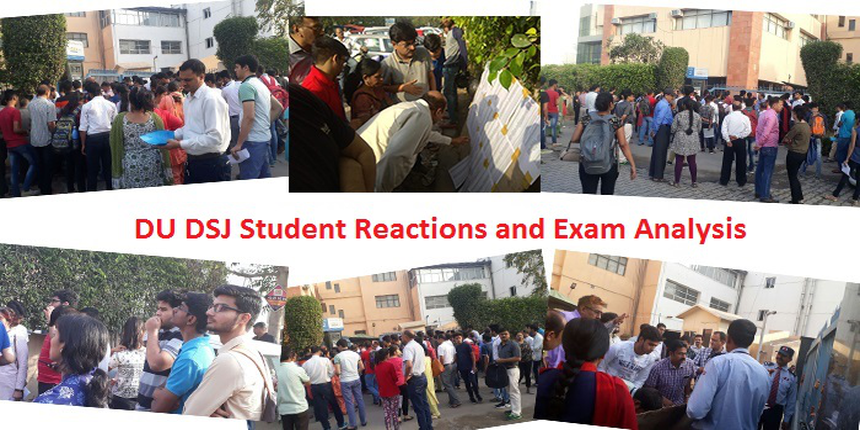 Michael, who opted for English paper found paper to be moderately difficult. According to her maximum questions were from General Knowledge. “GK questions were very difficult. You need to be updated very well. Apart from that reasoning was very easy.”

On the other hand, Kritika from CBSE board found the exam moderate (nor difficult neither easy). She found reasoning and maths questions easy in comparison to GK part.

Whereas, Khusbhu did not find  the exam difficult. According to her most of the questions were from general knowledge

Maximum Questions Were From General Knowledge

One of the aspirant, Khushal attempted 50% of questions. Most of the questions according to him were from general knowledge. On asking about if he faced any technical glitches, he said. “My calculator was not working. Rest all was fine.”

Maharajan from CBSE board said 60 questions were from General Knowledge and current affairs. The exam was above the expectation.

Speaking on the same lines, Lavisha also found the paper moderately difficult. Lots of questions from current Affairs and general knowledge were asked. There were very few questions from maths and reasoning.

The entrance exam, DU DSJ 2018 has concluded. According to the student reactions, Careers360 has drawn the following analysis of DU DSJ 2018:

Questions asked in DU DSJ 2018, a must refer

Q. Who has launched TEZ?

Q. Which is the first Indian city to have its logo

Q. Which is the highest prize for Journalism?

Q. What is the name of India- Pakistan Border?

Q. In the Global Manufacturing Index, what is India’s rank?

Q. Which were the states from where the government removed the Armed Forces Special Powers Act?

Q. Which is the government scheme to promote solar farming?

Q. Which movement started with the Dandi Movement

Q. Who is the chairperson of National Commission for Women?

Q. Which state has highest number of seats in Lok Sabha after Karnataka?

Q. Who is the winner of 53rd Jnanpith award?

Q. Who is the captain of Indian Women’s cricket team?

Q. Which article gives special status to Jammu and Kashmir?

Q. What is the theme of the 15th edition of Asia Media Summit?

Q. Who is the chairman of the press Council of India?

Q. Who is the present Chief Election Commissioner of India?

Q. Which article talks about freedom of speech and expression?

Q. Who is the present Director General of Doordarshan?

Q. Who is the Principal director of PIB?

Q. Who is the first woman Supreme Court Judge who has been directly elevated from the bar council?

Q. Who was given the Dada Saheb Phalke Award for 2018?

Q. Who is the current UN Secretary-General?

Q. When did demonetisation take place even before 2016?

Q. Who is the longest serving CM of India?

Q. Why was Leisang village in news?

Q. What is the purpose of Berne Convention

Q. Which committee was set up for Regional Rural Banks of India?

Q. What is the objective of VAN Dhan scheme in Chhattisgarh?

Q. In which country did orange revolution take place?

Q. Which country has the longest boundary with India?