Mass Communication Courses after 12th– Most students completing class 12 are at a threshold of their lives where they make the crucial decision that will impact their lives for a lifetime. Choosing the next course to pursue and make a career is that very big decision that has to be taken after careful thought. While traditional choices like engineering, medicine, accountancy etc have always been there, with the open communication channels have come a series of career choices that are increasingly being looked at by many students as an alternate career choice. Mass Communication is one of those. A generation where internet, TV, Videos, Films and such are a part of regular life, it is no wonder that mass communication has slowly grown to encompass all of this and more. It is here that students faced with a plethora of choices need to decide which mass communication courses after 12th they should take up. While one may have a passion for journalism, someone else may have a flair for writing. Some thrive with passion for films and such media while others may choose to get into advertising. The choices are many and the question is just one- What should be my choice of mass communication courses after class 12? Careers360 attempts to break down the major choices with all the necessary details for students to make their choice of which mass communication course after 12th. 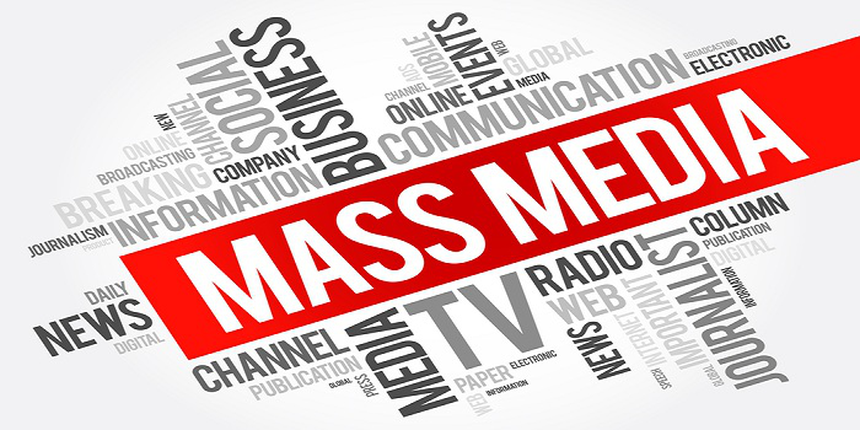 What do you want to be?

This is the first question to answer. Mass Communication is a vast field and many are the specializations under it. The decision of which mass communication course after 12th you need to pursue will be dependent solely on this. So ask yourself – do you want to be a journalist, TV presenter, writer, reporter, film producer, editor, photographer or advertiser? There are many avenues that are open to you. What you want to be will primarily decide the mass communication course you should study after class 12th. If you are not sure of what you want to pursue that’s ok too. You can take up the course and choose a specialization at a later point once you start the course and reflect on where your interests lie.

What is Mass Communication?

Media is now an integral part of our lives. In layman’s terms, mass communication is the process through which information is exchanged or imparted from a single source through media to a larger audience. However that is just a small description of what it entails. Mass communication is generally associated with journalism or print media, broadcasting through TV or radio, films, advertising or public relations. With more diverse options, mass communication has come to include social media and new media

The eligibility criteria are pretty flexible for all the mass comm courses offered after class 12th. You can come from a science background, commerce, arts or any other- you will still be able to take up mass communication. The reason is simple. Mass communication courses after 12th do not require a thorough knowledge of science which is the case for engineering or medicine or commerce unlike accounting etc. For students after class 12th, these mass communication courses will be the stepping stones to a career in the mass comm field they are interested in.

Most institutes ask for a basic knowledge of English, general aptitude and a good reasoning ability from mass comm aspirants. This is gauged from an entrance test conducted by the institutes. So you need to be good in your reasoning ability, have a good command over English and be abreast of the current affairs. If you qualify, you may need to face an interview too. Check the top mass communication entrance exams to get an idea of the various entrance exams for mass communication in the country.

Some of the Mass Communication Degrees can be listed as

1. Bachelor’s in Arts or B.A as it is popularly known. Most mass communication courses after class 12th are offered as B.A programmes

2. Bachelor’s in Science or B.Sc is being offered in specializations that are perceived to require some scientific precision and studies. Increasingly institutes and universities are offering B.Sc courses in media.

3. Bachelor’s in Design programmes are some that are also offered in areas of mass communication which deal with design and related aspects. These are specialized niche mass communication courses after 12th that are now an option for those who wish to combine their designing skills with media.

4. Bachelors’s in Fine Arts – another option for students who wish to pursue mass communication after 12th in specializations that are part of fine arts.

5. Diploma or Certificate programmes – while graduation is an important and crucial part of the one’s education, you could also look at pursuing shorter diploma courses to get a feel of the filed you wish to make your career in. However a word of caution that must be spelt out here is that graduation is the best path rather than certificate or diploma courses as graduation carries more weightage when it comes to career chances.

While these are degrees that can be pursued by students wishing to study mass communication courses after 12th, the choice of programme generally is dictated by the ambition that drives a student to choose a career. Some of you would wish to become journalists, some radio jockeys, film producers while other may wish to take up advertising, public relations. Some may be more into photography while others may wish to edit or write scripts. Whatever be the ambition, choosing the correct mass communication course after 12th is very important. We bring some career paths that you could opt for.

The daily newspaper which is a fixture in our lives to the news that is watched at night on television – well journalists are the people who bring all of that to us. Considering that we know all that is happening in the country thanks to the journalists, it is not surprising that journalism is looked at by many students as a very attractive and lucrative career. So, how to become one? There are many institutes that offer journalism as part of the mass communication courses after 12th while there are others that allow you to specialize in it.

Where can I study Journalism after class 12th?

There are many universities and institutes which offer journalism as a specialization in the mass communication courses they offer. The above list is of some of the more popular ones.

Films represent the dreams of many on celluloid. The script writer, photographer, producer, director, actor, musician and many more come together to create one film. Many careers and one destination! Well film making was and still is a lucrative career for many. In recent years, film making courses are being offered with specializations that suit the career dreams of all individuals who join them. Some of film making courses that can be taken up after class 12th are given below. The comprehensive List of Film Making Institutes in India can be checked for more details

Some Film Making Institutes in India