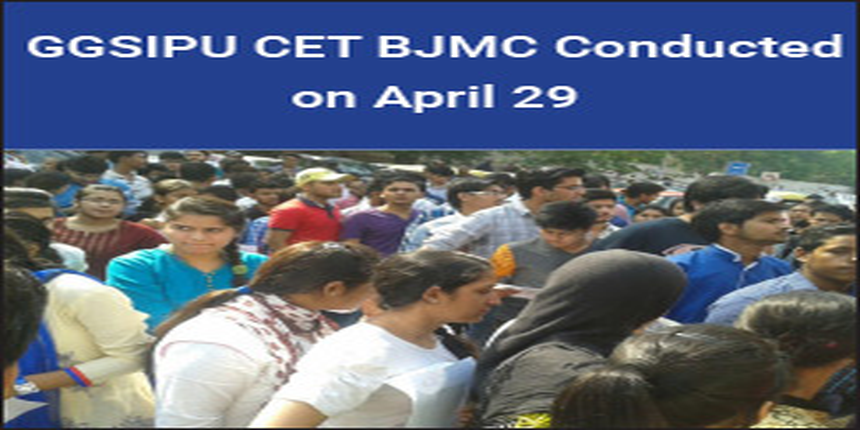 GGSIP University conducted its Common Entrance Test (CET) for BJMC admissions on April 29, starting at 3pm till 5:30pm. Around thousands of applicants appeared in the entrance test across centres. Precisely a week before the test, the officials changed the BJMC CET 2017 timings owing to the CBSE class XIIth examination schedule. “In the view of class 12th examination schedule, to enable prospective students to appear in the test...CET timings are modified as 3-5:30 pm,” reads an official statement. The BJMC CET results are expected to be announced on May 16, however, there are chances that the schedule will be updated by the officials.

The application process ended on April 4, after being extended twice. According to the official GGSIPU CET BJMC 2017 exam pattern, the test was conducted in an offline mode with four sections namely, English Language & Comprehension, General Awareness, Reasoning, and Media Aptitude. The duration of the test was of two hours thirty minutes. However, the total marks of the test was defined by the officials.

As per the marking scheme of the test, each of the section will have a weightage of 25 per cent. There will be one mark for every correct answer provided by teh test taker.

The IPU CET BJMC 2017 results will be announced on May 16 in an online mode in the form of scores and ranks. Only on the basis of the ranks, candidates have to follow the counselling process for final admissions in the BJMC programme of the preferred affiliated institution. The notification regarding the BJMC counselling will be intimated separately to the shortlisted candidates.

I got 1200 rank in ipu cet BJMC (Delhi General) May i have any chance to got admission in VIPS, JIMS Vasan Kunj and Trinity First Shift

Hello Raghav, you have pretty decent rank in BJMC, with that much of rank you are pretty much eligible for most of the college out there.

Though you are not eligible for top tier governemnt college. And do keep some college as backup plan.

And you have fair chance of getting JNTU can not say anything about OU. Hope this helps!!!

I got 566 rank in ipu cet BJMC (OUTSIDE DELHI GENERAL).. MAY I HAVE ANY CHANCE TO GOT ADMISSION IN // VIPS, MAIMS, JIMS?

Congratulations, as your hard work has paid of. As per your query, I would like you to know that you stand quite a good number of chances of getting a seat in MAIMS and JIMS through your rank.Hope this answer helps you with your query. All the best.

My rank in ipucet Bjmc is 1265. In round one the college allotted to me is tecnia. Should I wait for round 2 for better college? Like jims?

Glad to know as you could do what many could not. As per your query, I would like you to know that there  is nothing such thing called best college. All depends on the callibre of candidate how he/she grabs the opportunities and learn from them. If you want you could wait for the second if the college you got in first round does not suits your priorities. Hope this answer helps you with your query. All the best.

Hi, Ive got 370 Rank in IPU CET(BJMC) & in the first round Ive been given MAIMS as my College.

You have got a decent rank in IPU CET BA(JMC) and according to your rank you have a really good chance in VIPS by the sliding round. Last year the closing rank was 381 for 2nd shift in VIPS and 339 for 1st shift for an Outside Delhi General. So my advice for you would be to use float option as you may end up with VIPS if you have given it higher priority in your choice filling.

What is the date of ipu cet bjmc choice filling 2019?

IPU CET Counselling 2019: Guru Gobind Singh Indraprastha University has commenced the counselling of IPU CET 2019 on July 9. IPU CET 2019 counselling is being conducted in an online mode for all B.Tech programmes including B.Tech Biotech. IPU CET counselling will be held in three rounds followed by a spot round if there are any vacancies left. It may be noted that there will be no IPU CET  ; instead counselling and seat allotment will be on the basis of JEE Main Paper 1 scores. The counselling of IPU CET 2019 comprise of steps such as registration, choice filling and locking, admission fee payment and seat allotment. Candidates have to register first followed by payment of admission fee of Rs. 1000 (excluding bank charges) either through online payment or through challan.

Here is the link:

Thank you and all the best...

View All Questions
Have a question related to BJ (MC) ?

All About GGSIPU CET

Your IPU CET brochure has been successfully mailed to your registered email id .