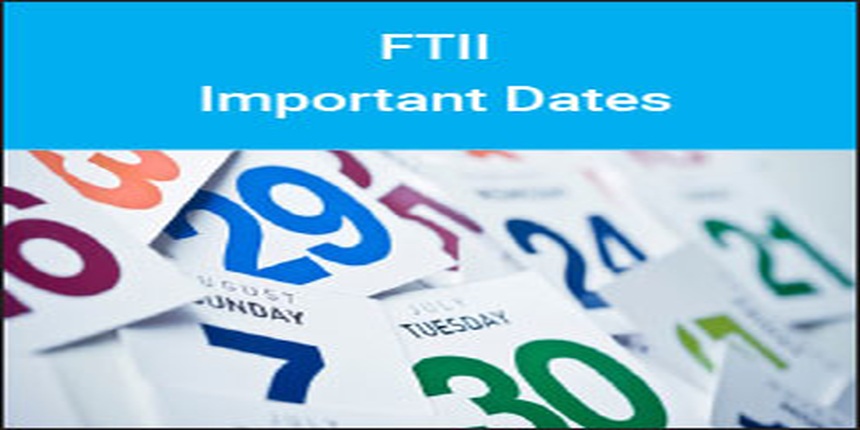 FTII Application Form 2017: The application form for registrations were available from February 5, 2017 in a completely online mode. The registration window was open till March 5, 5:30 pm. Candidates had to register before the deadline to be able to appear in the FTII entrance exam.

The officials,  FTII Admit Card was available from the first week of March 2017 for the registered candidates only.

FTII Entrance Exam 2017: The test was conducted in English in an online mode only. Candidates had to attempt 100 questions with zero negative marking.

According to the FTII important dates 2017, the FTII results were declared in May 2017 after which candidates have to appear in the selection rounds.

Stay tuned to www.media.careers360.com for more news and updates of FTII important dates

can i join Jet exam after 10th class

Hi dear,
If you are asking about Punjab JET then definitely you can apply after class 10th.
Punjab JET is mainly arranged by the Punjab State Board of Technical Education and Industrial Training. The process of admission is totally based on marks that a student obtains in their 10th exam.
If you wants to enroll yourself in polytechnic courses then surely you can go for this.


You can download GUJCET sample papers from the link below :

We don't have JET papers in our but you can download it from various website.simoly go to college and you will find it there.

Hello.
as per your demand I am providing you a link below from where you can download previous year question papers of JEE mains in Hindi language.
You can have this question paper in the PDF format along with their solution Too.
https://engineering.careers360.com/hi/articles/jee-main-question-paper
Best of luck.
Read More
Answer
Answer Later
Report
27 Views

how to apply for the exam jet exam

You need to follow the below steps to fill JET application form :-


For detailed and more information go through our page for which link is provided below :-

is there any coaching for jet exam in Delhi?

So according to your query, there are only few coaching programs for FTII- Jet ( film and television institute in India). As per my knowledge, Filmmakers fans offers coaching for all the students who are aspiring for the admission in FTII/ SRFTII.  Filmmakers fans offers a 22 day online FTII/SRFTII and online coaching, having a duration of five or six months. For getting admission in the coaching aspirant have to clear an apyitude test, conducted by the coaching institute. The fees for the online coaching of 6 months is 5,000 in total, and the batch strength is only 6 candidates. Every batch starts from the first week of July. Along with coaching, students will also have workshops to improve their practical skills as well. The faculty is the best part, they have gathered very talented faculty like Bala senthil kumar ( screenwriter), Anirban lahiri(film crirtic), Sreekanth gopinathan(marketing professional), etc. For more details here is the link to follow-
http://celluloid360.filmmakersfans.com/ftii-srfti-entrance-exam-coaching-preperation-2017/
Hope this was helpful. Feel free to ask more
Thank you!

View All Questions
Have a question related to JET Exam ?