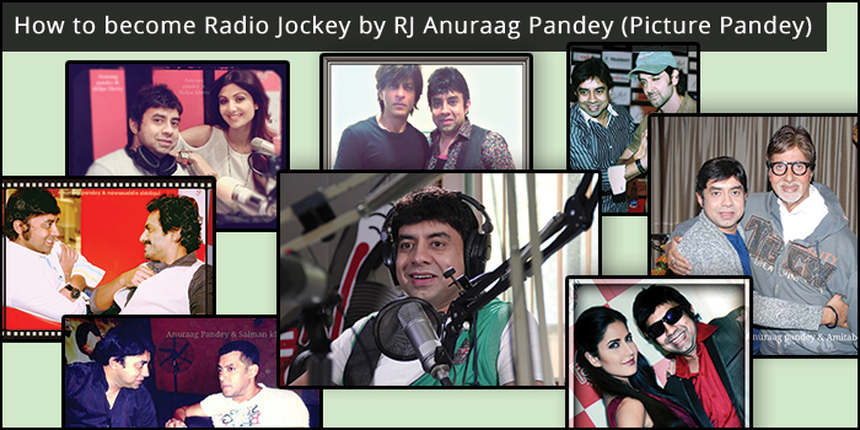 How to become Radio Jockey - Radio is one of the most popular mediums of communication in India. Radio is played everywhere – a taxi, auto, bus, household; it is an all prevalent medium that is simply popular amongst one and all. India is also a movie obsessed nation where songs and music are an integral part of each and every move that is produced. These also form the majority of the telecast that comes from most of the radio stations in addition to news, classical music and interviews of celebrities from all walks of life. This is where the radio jockey comes in. It is a testament to the important roles played by the RJs or radio jockeys as they are commonly known that they are well known amongst their listeners with a good fan base. So what does the RJ do? He/she connects with the audience through humour, empathy, good listening skills such that people feel they are a part of their daily lives. However, the job of a radio jockey is not as simple as it sounds. To connect and talk about every topic under the sun, radio jockeys need to be well aware of the current affairs, be able to discuss hot topics, level out hot-headed listeners and possess a deep knowledge about the music they play. So how does one become a radio jockey, what are the perks and what are the challenges? These and more questions are answered by RJ Anuraag Pandey (Picture Pandey) of Fever 104 FM who in a candid interview with Careers360 breaks down the myths of being a radio jockey, discusses issues that affect jockeying and also the traits required to be a radio jockey. Read the complete interview of RJ Anuraag Pandey also known as Picture Pandey where he tells how to become Radio Jockey, how one should enhance their skills as a radio jockey and how they should establish connect with the people.

Careers360: From Ameen Sayani, to Anu Kapoor to Anuraag Pandey, tell us how the role of a radio jockey has evolved?

Anuraag Pandey: There is a great deal of evolution in the field of Radio and one of the main reason for it is due to the evolution in society. From the symbolic love scenes in old movies to the explicit scenes of today- the evolution is there to see. That works for radio too. Radio is not just about songs, it is also a very important and impactful source of communication. As Radio Jockey, I continuously talk and raise awareness about the problems faced in my city or social issues which are affecting society by and large.

In the past, I feel there was less pressure on the radio jockey. Today, RJs will talk about a specific place and issues prevalent there on maybe a daily show. Over the weekend, the show will have a different format. A Radio Jockey has a responsibility towards what he/she speaks on air as it will have an impact on the people listening to him/her. The changes I see are in the audience tastes, language, thereby leading to the change in the way a radio jockey speaks, handles the show.

Careers360: With the advent of FM, there has been a revival of radio. Do you think with the passage of time, will it be able to sustain its popularity?

Anuraag Pandey: Radio as means of communication is unlikely to get finished or be overshadowed by any other medium. That may happen with a medium like TV but not radio where there is a one on one interaction with news and information more localized and relevant to the people of that area making them relate to it. As an RJ I am aware of what is happening in and around me, which particular incident is affecting the people etc. Therefore I will be able to highlight that in my show and bring it to the notice of the people listening to me whereas say for a TV show, this is not the case. It is national, worldwide news and incidents that are generally brought to the fore. Radio Jockeys I feel are more opinionated and have to connect with their audience. Once the RJ strikes the chord and the connect is built, he/she can go on to capitalise on it. Audiences may follow RJs because of their style of talking or sensitivity to issues.

Careers360: Do you think that the presence of social media is overshadowing Radio as a medium of communication

Anuraag Pandey: Radio has both active and passive listeners. Active listeners are those who merely listen to music such as women who are say home makers. Passive listeners are those who are driving a car, are stuck in a traffic jam etc. You don’t need much effort whereas for social media, you need to make the effort to penetrate, see, read and then react. Radio has a wonderful reach – you can listen to it anywhere while say TV requires a place to watch and requisite environment.

Careers360: What are the qualities that are required to be radio jockey?

Anuraag Pandey: Once the question crops in your mind as to "how to become a radio jockey," the second thing which you must ask yourself is the qualities required. Hence, voice quality is very important if you want to become a radio jockey. All of us want to hear a voice which is soothing and pleasant to the ears. Another other important trait is to be knowledgeable and well versed with a wide array of things to be able to talk about anything and everything. However, nonsense is definitely excluded from this knowledge. If there is no substance to the talk and communication is not right, the audience connect will be missing. To sum up, RJs should be well versed with literature, require sound general knowledge and awareness of current issues all the while presenting it in an acceptable manner to the audience. A pleasing personality and this is not about looks but manner of speech, thought is equally important.

Careers360: Do tell us something about a life of a radio jockey?

Anuraag Pandey: Life is not the same for all radio jockeys as everyone has their own style and shows are different. My day begins early. After my exercise routine, I read at least fifteen e- newspapers as it is essential to be updated with what is happening around the world as well as in different spheres of life. My aim as a Radio Jockey is to motivate and inspire people. I think my work is done when the person I interact with is motivated enough to accomplish the set goal. I want to enrich people with words. Self-motivation is very important factor for a radio jockey and yes, you should choose your own subject when you decide to become one.

Careers360: What are the different kinds of Radio Jockey?

Anuraag Pandey: When you are thinking about, "how to become a radio jockey" then you should be very clear that as an RJ, your job is not just to play music. There are different spheres into which you can penetrate. It depends on interest areas, for instance, I like to talk about movies. There are RJs who like to speak about sports while there are others who talk about romance and love. Your show will depend upon your interests.

Careers360: Is it possible that those who do not have any professional training or courses for all those who aspire to become a radio jockey.

Careers360: What are the employment opportunities for a radio jockey? What is the salary package that one can expect as they begin career as a radio jockey?

Anuraag Pandey: Radio will never die so opportunities will always exist. However, it is expected that the revolution in FM to widen its reach will create more possibilities for jobs. FM is still available in a narrow sphere and it still has a long way to go. If a small radio station will be set up, it will mean jobs for at least 10-20 people if we look at it from a very micro level point of view. The medium and technology are there so it requires applying. Salary is dependent on your performance and how well you connect to the audience. It is all about demand and supply as well as the vacancies available in radio stations. I would like to state that there is no salary bar for the right candidate and right talent.

Careers360: In the end what are some of the tips that you would like to give to those who are trying to make their career as a radio jockey?

Anuraag Pandey: You must be willing to work hard. Radio Jockeying is not about popularity but much more. You need to look beyond the popularity to sustain by knowing and doing your work well. Take it up if it is a passion and you are good at communicating and interacting. You must be well read, possess strong observation and networking skills. You should know when and whom to call to get information.