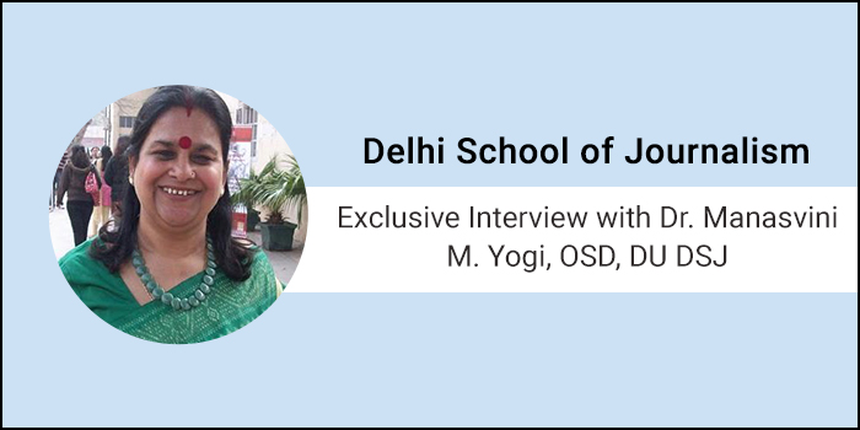 Delhi University inaugurated the Delhi School of Journalism in September 2017 with the launch of the five year integrated journalism course. Even if the admissions started late, there were a lot of applicants who wished to fulfill their dream of pursuing journalism from the Delhi University.  The first batch for the course was admitted through a national level entrance test thus opening a plethora of opportunities for the aspiring journalists. In an exclusive interview with Dr. Manasvini M. Yogi, OSD, Delhi School of Journalism, University of Delhi, Careers360 delves into the setting up of the exclusive school for journalism, challenges faced while setting up the school, the admission process and the future plans. The five year programme will allow students to not just study the conventional aspects of journalism but also to learn a regional and a foreign language alongside thereby giving impetus to their career prospects. Keeping pace with the changing times, new aspects of journalism are being covered in the twenty eight papers that are being offered in the programme. The course is being taught both in English and Hindi with 60 seats each being offered in both the mediums. Students also have the option to exit the course after completing three years of their graduation programme. Read on to know more….

Careers360:  Congratulations on the launch of the first five year integrated Journalism Course. What were the main challenges that were faced as the programme was launched?

Dr. Manasvini M. Yogi: One of the challenges that we faced was in the setting up of the proper infrastructure that was necessary to carry out the programme. Certain approvals were needed to set up and build the required infrastructure. However, the requisite and timely support from the Delhi University was instrumental in making it possible.

Careers360:  What was the reason for the setting up of the DSJ?

Dr. Manasvini M. Yogi: Well, firstly this department should have come into existence long ago. See, the University of Delhi did not have a particular department offering a course in the field of journalism, mass media and mass communication. There are only six colleges in the University which offer such courses.  DU is a well-known and sought after University. There was a dire need to fill this requirement of students since media is a booming sector.

The second reason is that post-graduation in mass media is not being offered in Delhi University. Graduates in mass media needed to go outside the University to pursue their post-graduation say in Jamia, IIMC, or even Xaviers in Mumbai. So we came up with the option of a five year integrated course in journalism and mass media that gave students this benefit.

One more reason is to provide equal opportunities to boys. Most colleges affiliated to the Delhi University offering these journalism and mass media courses are being run in girls only colleges. Only Maharaja Agrasen College and DCAC offers admissions to boys but then there are very few seats in these colleges due to reservation resulting in fewer opportunities for the boys.

Careers360:  The programme was launched quite late – any particular reason? What will be the general timeline when this will be offered next year?

Dr. Manasvini M. Yogi: We needed certain approvals from the academic council, executive council of the University hence the delay. According to the guidelines of the University Grants Commission (UGC), it is mandatory to have 180 days of teaching. To comply with this, we have decided to cut down on the holidays. The first semester exams begin from January 25, 2018.  So I think we will be on track inspite of the delay.

Next year, we will begin the academic session from July 19, 2018 and things will be streamlined from then on according to the Delhi University calendar. So students can expect the application forms in May or June 2018 tentatively.

Careers360:  What are the specializations that are offered?

Dr. Manasvini M. Yogi: We are not offering specialization as such in the programme. However, we have covered every aspect of mass media, mass communication and journalism per se. Students will have to appear for papers in:

The above list is just a small example. There are 28 papers in 10 semesters. This curricula is exclusive to the Delhi School of Journalism.

We have also introduced languages in the curriculum which is a very big component. Students can choose one from the four regional languages that will be taught - Sanskrit, Tamil, Bengali and Urdu. Students will also need to learn one foreign language out of the specified four namely French, Spanish, Chinese and Arabic. This is a compulsory constituent and there will be tests, marks for these too. Students will have to appear in the viva also. The big advantage in this is that students can learn one regional and one foreign language without exerting themselves by going to a separate institute to learn them. By the time they complete the programme, they will be fluent in the languages with a competence of working in areas where these languages are predominantly spoken. It is an advantage to be able to speak the local language for journalists so they imbibe the culture, understand it and act accordingly.

In the near future, we may be adding more languages to widen our horizons.

Careers360:  Will all the courses under affiliated colleges come under the purview of the DSJ in the coming years?

Dr. Manasvini M. Yogi: As of now, no. It is a possibility in the near future. The onus right now is to establish the DSJ properly and then take on such additional responsibilities.

Careers360:  How will the students be admitted to the five year integrated journalism course?  What is the admission process like?

Dr. Manasvini M. Yogi: The admission is based on a national level entrance test.  The test is conducted all over India. The entrance test for the mass media, journalism course at DSJ this year was conducted at 18 centres in different parts of India and that is one of the reasons why the session began a bit late.

Candidates applying for admission need to score at least 50% in the 10+2 (best of four subjects) and their performance in the entrance exam will also be taken into account. We are looking for candidates who have aptitude for journalism and hence our focus is not on the marks.

Careers360:   What was the application trend this year for the five year integrated journalism course?  How many seats are being offered? What are the kind of students the school is looking for?

Dr. Manasvini M. Yogi: This year we did not receive many applications as by the time we started the admission process, the Delhi University admissions for other courses had already closed. Moreover many students would already have applied for seats elsewhere as there was no knowledge of the programme. Still we received around 2600 applications which is a relatively good number considering that we started a bit late. There are 60 seats in English and 60 in Hindi Medium.

We are looking for students who have interest in mass media and journalism. Now this cannot be just measured by the academic marks only and that is one of the reasons why we have not kept the eligibility criteria very high. The need is for students with aptitude and inclination in the field of journalism  and the selection process is therefore made to deliver just that.

Careers360:  With an increase of penetration of social media, is it part of the curriculum as well?

Dr. Manasvini M. Yogi: There are papers on social media, web and digital journalism. We also offer a paper in ICT which is information, communication and technology as well as new media.

Careers360:  Is the institute fully geared with the infrastructure and  do we have a permanent faculty or guest faculty?

Dr. Manasvini M. Yogi: We have two full time faculty members and they are on contract. The guest faculty includes teachers from various colleges of Delhi University, depending on their area of specialization and requirement at Delhi School of Journalism. For example, in order to teach the students Sanskrit or French we have trained teachers coming from colleges.

Careers360: Since there is an option for the students to opt out once they complete they graduation in the journalism course, will you be offering them help with regard or placements or will it be only after the completion of the full five year integrated course?

Dr. Manasvini M. Yogi: Irrespective of the programme done, our students will get all kinds of assistance in getting placed. We have already set up a placement cell. Right now it is just the first semester and the programme is in its infancy so there is no need for us to stress on placements. As far as internship is concerned, it is an integral part of almost all the papers. Internship exposes the students to the real world and in the long run it will also help them to get a job. Students will be encouraged to take up internship during the holidays. We are tying up with different industries and they will be sent there for internships.

Careers360:  What is the main objective to have journalism course in Hindi also?

Dr. Manasvini M. Yogi: There are a number of students from the Hindi belt who do not get an opportunity to do this course. The course is one and we are just doing it in two mediums. The idea is to make Hindi students comfortable studying Journalism and understand it. There is no difference in the courses except for the medium. Moreover, Indian journalism is more Hindi centric as compared to English. Most of the television channels are in Hindi.

Careers360: What are the future plans for the DSJ? What other kind of programmes / specializations will be offered in the future?

Dr. Manasvini M. Yogi: We shall definitely be looking at expanding in the near future. Right now it is too early but we have definite plans for short term as well as certificate courses; courses for working as well as non-working people and more. In the coming days we would be setting up our own studio as well.

View All News and Articles
Have a question related to DU DSJ Entrance Exam ?